Twisting and Turning the Sulfonamide Bond: A Synthetic, Quantum Chemical, and Crystallographic Study

Structural restriction of the sulfonamide bond was used to design sultams with abnormal geometric parameters. Based on analysis of tertiary aliphatic sulfonamides published in the Cambridge crystallographic database, Paquette’s sultams (i.e., bridged bicyclic sultams with a bridgehead nitrogen atom) were outlined, and a number of these compounds (including the novel smallest representative, 2-thia-1-azabicyclo[2.1.1]hexane 2,2-dioxide) were synthesized by cyclization of the corresponding amino sulfonyl fluorides. A series of tertiary aliphatic sulfonamides was studied by crystallographic and quantum chemical methods. It was found that the s-character of the nitrogen lone pair is the most important factor defining properties of the S–N bond. Thus, going from the sp3-hybrid lone pair in common sulfonamides to the sp-like lone pair in the smallest Paquette’s sultam resulted in an increase in S–N bond length by ca. 0.06 Å. The strain energy of ca. 30 kcal/mol was predicted for the latter compound, which was higher than for any existing sulfonamides studied. 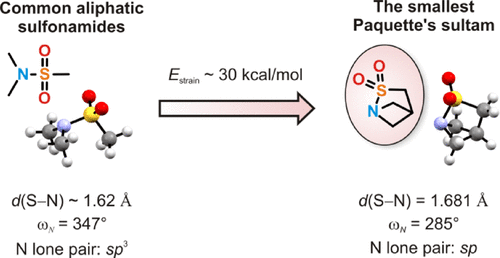