Delivering Structural Information on the Polar Face of Membrane-Active Peptides: 19F-NMR Labels with a Cationic Side Chain

Conformationally constrained non-racemizing trifluoromethyl-substituted lysine isosteres [(E)- and (Z)-TCBLys] with charged side chains are presented as a new type of 19F-NMR labels for peptide studies. Design of the labels, their synthesis, incorporation into peptides and experimental demonstration of their application for solid state NMR studies of membrane-active peptides are described. A series of fluorine-labeled analogues of the helical amphipathic antimicrobial peptide PGLa(Nle) was obtained, in which different lysine residues in the original peptide sequence were replaced, one at a time, by either (E)- or (Z)-TCBLys. Antimicrobial activities of the synthesized analogues were practically the same as those of the parent peptide. The structural and orientational parameters of the helical PGLa(Nle) peptide in model bilayers, as determined using the novel labels confirmed and refined the previously known structure. (E)- and (Z)-TCBLys, as a set of cationic 19F-NMR labels, were shown to deliver structural information about the charged face of amphipathic peptides by solid state 19F-NMR, previously inaccessible by this method. 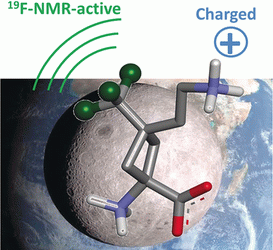