A series of nine compounds based on 3-[4-(benzyloxy)phenyl]propanoic acid core containing a 1-oxa-9-azaspiro[5.5]undecane periphery was designed, synthesized and evaluated as free fatty acid 1 (FFA1 or GPR40) agonists. The spirocyclic appendages included in these compounds were inspired by LY2881835, Eli Lilly's advanced drug candidate for type II diabetes mellitus that was in phase I clinical trials. These polar spirocyclic, fully saturated appendages (that are themselves uncharacteristic of the known FFA1 ligand space) were further decorated with diverse polar groups (such as basic heterocycles or secondary amides). To our surprise, while seven of nine compounds were found to be inactive (likely due to the decrease in lipophilicity, which is known to be detrimental to FFA1 ligand affinity), two compounds containing 2-pyridyloxy and 2-pyrimidinyloxy groups were found to have EC50 of 1.621 and 0.904 µM, respectively. This result is significant in the context of the worldwide quest for more polar FFA1 agonists, which would be devoid of liver toxicity effects earlier observed for a FFA1 agonist fasiglifam (TAk-875) in clinical studies. 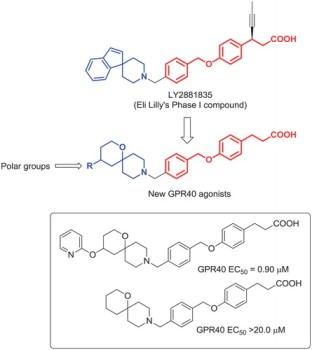