Because nonopioid analgesics are much sought after, we computationally docked more than 301 million virtual molecules against a validated pain target, the α2A-adrenergic receptor (α2AAR), seeking new α2AAR agonists chemotypes that lack the sedation conferred by known α2AAR drugs, such as dexmedetomidine. We identified 17 ligands with potencies as low as 12 nanomolar, many with partial agonism and preferential Gi and Go signaling. Experimental structures of α2AAR complexed with two of these agonists confirmed the docking predictions and templated further optimization. Several compounds, including the initial docking hit ‘9087 [mean effective concentration (EC50) of 52 nanomolar] and two analogs, ‘7075 and PS75 (EC50 4.1 and 4.8 nanomolar), exerted on-target analgesic activity in multiple in vivo pain models without sedation. These newly discovered agonists are interesting as therapeutic leads that lack the liabilities of opioids and the sedation of dexmedetomidine. 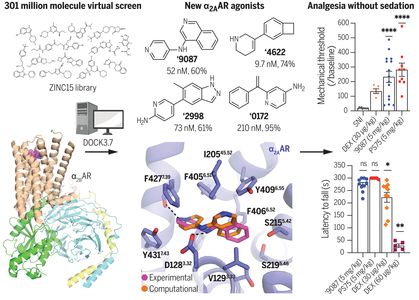