Polymorphic transition due to grinding: the case of 3-[1-(tert-but­oxy­carbonyl)­azetidin-3-yl]-1,2-oxaz­ole-4-carb­oxy­lic acid

Konovalova I.; Shaposhnyk A.; Baumer V.; Chalyk B.; Shishkina S.

A polymorphic transition as a result of grinding was found for 3-[1-(tert-but­oxy­carbonyl)­azetidin-3-yl]-1,2-oxazole-4-carb­oxy­lic acid. The thorough study of polymorphic structures before and after crystal structure transformation has revealed some pre-conditions for a polymorphic transition and regularities of changes in molecular and crystal structure. In metastable polymorph 1a, the conformationally flexible molecule adopts a conformation with the higher energy and forms a less preferable linear supramolecular synthon. Additional energy imparted to a crystal structure during the grinding process proved to be enough to overcome low energy barriers for the nitro­gen inversion and rotation of the oxazole ring around the sp3–sp2 single bond. As a result, polymorph 1b with a molecule adopting conformation with lower energy and forming a more preferable centrosymmetric supramolecular synthon was obtained. The study of pairwise interaction energies in the two polymorphs has shown that metastable polymorph 1a is organized by molecular building units and has a columnar-layered structure. A centrosymmetric dimer should be recognized as a complex building unit in more stable polymorph 1b, which has a layered structure. 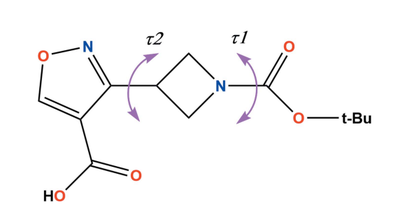