Five series (28 structures) of photoswitchable β-hairpin peptides were synthesized, based on the cyclic scaffold of the natural antibiotic gramicidin S. Cell-type selectivity was compared for all activated (diarylethene ring-open) and deactivated (closed) forms in terms of antibacterial activity (MIC against Escherichia coli and Bacillus subtilis), anticancer activity (IC50 against HeLa cell line), and hemolytic cytotoxicity (HC50 against human erythrocytes). Correlations between the conformational plasticity of the peptides, their hydrophobicity and their bioactivity were also analyzed. Considerable improvements in selectivity were achieved compared to the reference compound. We found a dissociation of the anticancer activity from hemolysis. Phototherapeutic indices (PTI) - HC50(closed)/MIC(open) and HC50(closed)/IC50(open) - were introduced for the peptides as safety criteria. The highest PTI for HeLa-selective toxicity were observed among analogues containing hydroxyleucine on the hydrophobic face. For one compound, high PTIs were demonstrated across a range of different cancer cell lines, including a doxorubicin-resistant one. 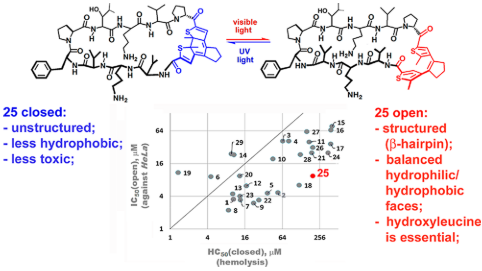