An efficient synthesis (up to a 200 g scale) of 3-hydroxypyrrolidin-2-ones bearing alkyl substituents or functional groups at the C-5 position is described. The reaction sequence started from 1,3-dipolar cycloaddition of in situ generated nitrile oxides with (meth-)acrylates into 3-substituted isoxazoline-5-carboxylates. The catalytic hydrogenolysis of the isoxazoline N–O bond was optimal upon using H2 (1 atm) at rt, with the following order of the catalyst activity: Pd–C > Pd(OH)2–C > Pt–C. The reactions with Pt–C were more selective for the synthesis of pyrrolidones, while Pd–C provided the fastest conversion rates. The stirring efficiency had a positive impact on conversion rather than elevated temperatures (up to 40 °C) or pressure (up to 50 atm). The diastereoselectivity was governed mainly by steric factors, with a dr of 1:1 to 3:1 (cis- and trans-isomers could be separated). Higher homologues (isoxazolinylacetates and -propanoates) were suitable for the synthesis of 6- or 7-substituted 4-hydroxypiperidones and 5-hydroxyazepanones, respectively. The proposed methods are tolerant to functional groups, including CF3 (but not CHF2 or CH2Cl), ester, and most N-Boc-protected amines. The utility of hydroxyl groups in lactams was shown by functional group transformations. Hydrogenolysis of C(5)-functionalized isoxazolines, bearing trimethylsilyl, phosphonate, or sulfone groups, was also studied to demonstrate limitations. 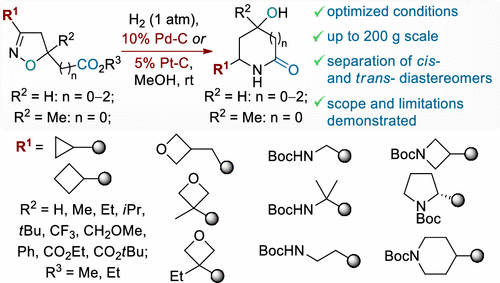