Synthesis of 1‐methyl‐6‐((2‐(aryl‐(heteryl‐))‐2‐oxoethyl) pteridine‐2,4,7(1H,3H,8H)‐triones via [4 + 2]‐cycloaddition of 1‐methyl‐5,6‐diaminouracil with ethyl 4‐aryl(heteryl)‐2,4‐dioxobutanoates is described in presented work. It was established that the reaction occurs regioselectively and proceeds under refluxing of starting compounds in acetic acid for 60 min. The structures of synthesized compounds were proven by complex of physicochemical methods including infrared, 1H‐, 13C‐NMR spectroscopy, liquid chromatography–mass spectrometry, and electron impact–mass spectrometry. Based on the detail analysis of the correlational NMR spectral data (correlation spectroscopy, heteronuclear single quantum coherence, heteronuclear multiple bond correlation, and Nuclear Overhauser effect spectroscopy), it was determined that in dimethyl sulfoxide solution, the 1‐methyl‐6‐((2‐(aryl‐(heteryl‐))‐2‐oxoethyl)pteridine‐2,4,7(1H,3H,8H)‐triones exist in two tautomeric forms: ketone (A) and enol (B). It was also found that tautomeric behavior of aforementioned compounds in hexadeuterated dimethyl sulfoxide is sensitive to the nature of the aryl or heteryl substituent at the position 6 of ring. The electron donating groups shift equilibrium to the tautomer A, while electron withdrawing – to the tautomer B. The synthesized compounds were tested on antiradical activity. It was found that obtained compounds reveal radical scavenging activity comparable or higher than ascorbic acid. 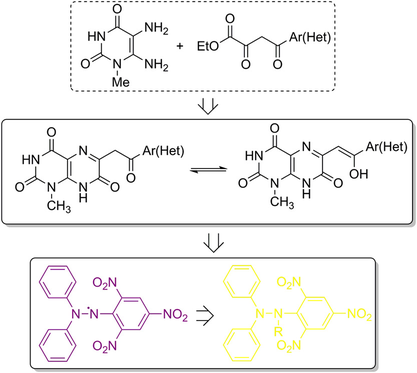