Modelling of an autonomous Nav1.5 channel system as a part of in silico pharmacology study

A homology model of Nav1.5, based mainly on the crystal structures of Nav1.2/1.5 was built, optimized and successfully inserted into the membrane bilayer. We applied steered and free MD simulation protocols for the visualization of the mechanism of Nav1.5 activation. We constrained dihedrals of S4 trigger to introduce a structural tension with further rearrangement and movement of secondary structure elements. From these, we observed an intracellular gate opening and movement of the Lys1419 residue caused by a gradual displacement of the distal S6 α-helix with the extended S4 3–10 helix of voltage-sensing domains (VSD). A construction containing the Lys1419 residue in P-loop also changed its position due to the extension of this helix and subsequent induction of the pore-forming helixes motion. From this point, a double membrane system was generated, implying a free of ligand Nav1.5 protein and on the opposite side its copy containing a docked bupivacaine molecule inside the pore channel. The system can be used for the design of selective inhibitors against the Nav1.7 channel, instead of mixed effect on both channels. 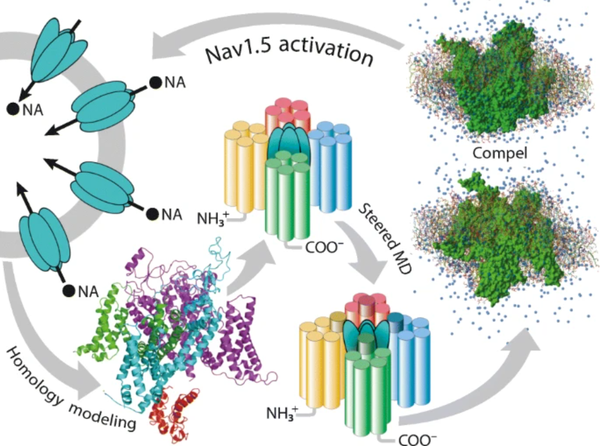